When two prolific award winning authors get together for some fun, watch out!  Anna Belfrage (author of the Graham Saga Books) talks to Helen Hollick (author of the Sea Witch pirate stories)-

Pirates? Why write about pirates? I guess the simple answer is: because when I wrote the first of my pirate-based Voyages, Sea Witch, no one else, as far as I could discover, had done so.
Read on.
I adored the first Pirates of the Caribbean movie, The Curse of the Black Pearl, (not the others in the Disney franchise: they ranged from OK-ish to terrible). I was enchanted by it, and not entirely because of Johnny Depp’s portrayal of Captain Jack Sparrow, (although that helped!) The movie was fun. None of it was meant to be taken seriously and nearly every scene had a laugh attached to it. Laughter is good for us, therefore darn good adventures, be they pirates, Star Wars sci-fi, Game of Thrones fantasy or whatever-floats-your-boat are good as well, be they movies or novels. They are also escapism from the daily grind, something we all need and enjoy. 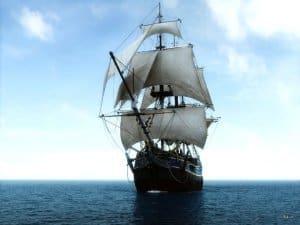 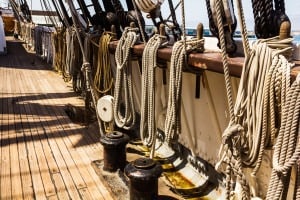 He leant back against the rail, looked about with a critical eye – completely at ease with the ship’s perpetual rise and fall and roll motion. “Sails set fair, cordage coiled and stowed neat, decks clear and tidy.” He pointed to a nearby hatch that had been partly swung open to let light and air down to the deck below; “Secured correct. Looks like this vessel has a captain who knows what he’s about, and a crew not made up of mithering landlubbers who don’t like to get their fekking hands dirty. She’s smaller in length and width than my ship, and her quarterdeck is higher. I don’t have any poop deck aboard Sea Witch. My father had a ship like this one when he sailed with Henry Morgan. She was a sound vessel, from what I gather. As fast as a greyhound. Regina Anne won’t be as good if she needs a turn of speed, but she seems seaworthy enough.”
“I don’t care if she’s not the bloody HMS Victory,” Alex said. “As long as she’s not the Titanic! I hate the sea. I hate the way it goes up and down; I hate the cold, the wet!”
He looked at her quizzically, not recognising the ships’ names. “The sea can be fickle, I grant, and you must treat her with the greatest respect. She can be all those things, but the sea and a ship, to some, mean freedom and dignity. You treat sea and ship like a mistress, with care and attention. And you put up with their squalls and the tantrums for what they offer in return.”
Alex nodded, pretending she agreed. For all the passion he was expressing, to her mind he was talking fool nonsense. She did not care a bent binnacle, or whatever the nautical words were, for this ship or any ship, and she had no idea why she was listening to this rag-tag ruffian. She had no idea who or what he was, although that cutlass and pistol reminded her of the appearance of a pirate. Whoever, whatever, she had a suspicion that he did not belong to this boat – ship. There was something about him, something different yet familiar? He does not belong to this ship or this time, she thought. Like me. He shouldn’t be here.
Somehow that helped, and she suddenly found herself talking and talking, letting loose all the fears that had been churning, heavy in her stomach – and had refused to be spewed up over the side with her seasick vomit. It all poured out, the whole story of Matthew and Luke, finding a ship to take her as passenger, the misery of seasickness, the horror of it all and the fear that any moment may be her last.
Embarrassed at her outburst she ended with the truth. “What if this ship sinks? I’m scared shitless!”
He answered her with a smile and equal truth. “Ships do sink – more often than us sailors want to think about. Wind, tide, storms, current, they can all take their toll.” He gave a low, deep-throated laugh. “And then there’s pirates.”
Alex decided to ignore his last remark. She had enough on her over-full plate as it was. “Not the ship Matthew is on.” She gave him a despairing look. “Not the ship with my Matthew. His ship is sturdy and fast and safe. He is safe. He is!”
Jesamiah, Captain Acorne, did not reply. He just looked at her, and something in his eyes made her want to cry. “He must be safe,” she said. “Without him, I would die. Just like that.” Alex bit her lip in an effort not to wail out loud.
Captain Acorne put his arm around her shoulders and drew her to his side. For that brief moment Alex felt warm and comfortable. Safe. Despite the fact that he stank of unwashed clothes, sweat and tar. Matthew smelt the same, although without the tar. Tears of lonely grief filled her eyes, her heart and her soul.
“Believe in yourself, sweetheart,” Jesamiah said as he kissed the top of her head, “and keep that vision of freedom in your mind. The blue sea, the white-capped rollers, the wind that is filling the sails. Touch a stay every morning for luck. And never give up hope. Once you do, you might as well head for the horizon with your arse on fire.”
She blinked back the tears, shut her eyes, gripped the rail. When she opened them again, he had gone. But there, on the deck beside her foot was a tightly stoppered silver flask, and, wound around it, a blue ribbon.

Be sure to stop by and learn more about Helen Hollick and her pirates at her website and at her blog!

and, of course, find out more about the Graham’s and Anna Belfrage at her website

The comments, advice and opinions expressed here are those of authors whose books have been honored with a B.R.A.G. Medallion. They do not necessarily reflect the views of the owners, management, or employees of indieBRAG, LLC.
Authors' Chat, award winning books, indieBRAG, The B.R.A.G.Medallion, The Self-publishing World, The World of Reading, Uncategorized, Writers, Readers & Self Publishing Anna Belfrage, award winning books, Helen Hollick, Historical fiction, Pirates

One response to “A Swashbuckling Journey!”