Montfort The Founder of Parliament – Of Journey and Research 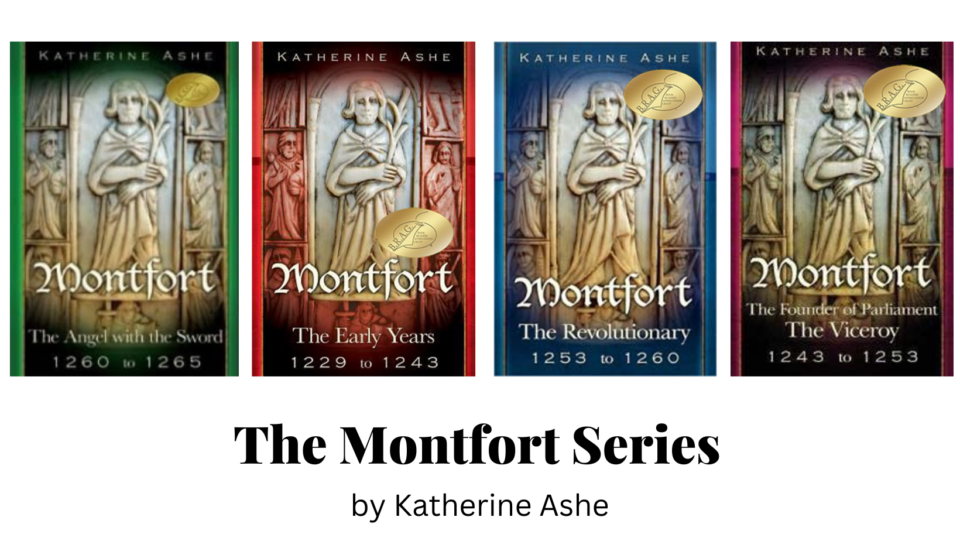 Katherine Ashe’s four-book series portraying[dl1]  Simon de Montfort was completed in September of 2011 when Montfort The Angel with the Sword was available for purchase. This concluded 34 years of research, writing, and traveling to the locales associated with Simon. The series was written under the “aegis of fiction” owing to gaps and rampant bias in the historical record, but the conclusions Ashe reached follow a logical and well-reasoned strand, her research taking on the flavor of an investigation. The paradox between Montfort’s traitorous reputation, negative accounts, and yet acknowledgments as pivotal in the founding of modern democratic government piqued Ashe’s interest

Every volume she read on Montfort in the US starting in 1977 contradicted each other so she traveled to the original source material at the British Library and the Public Record Office in London and the Bibliotheque Nationale in Paris. There she found items that provided new insights. Apparently, King Henry and his queen were experiencing miscarriages and needed an heir desperately. Nine months after Montfort visited the King and Queen at Kenilworth, the home of Montfort, the Queen delivered a lusty, healthy boy. The breach of friendship with King Henry was so sharp that Simon fled for his life and was in exile for four years.

Eventually, Ashe’s research was carried on at the Astor Tilden Lenox Library in New York where 19th-century reprints of a broad range of 13th-century documents widened her understanding of the period and the prejudices of Montfort’s contemporaries both for and against him. There was the entire world in which Montfort lived that needed to be understood. Ashe threaded her way not only through the period’s religious views, agriculture, economics, armor, and architecture (palatial, military, and vernacular.) In her words, “My research has been done almost entirely the old-fashioned way — going to the original sources as much as possible, and reading, and reading, and reading.”

Montfort is not a dry work of research, but a fast-paced story of adventure where Ashe’s 34 years of investigative research have resulted in sweeping, life-like scenes. She shares with readers the delight she experienced during her journey in a way that connects with her audience. She has critics, but her answers parallel the reasoned approach she takes in her novels; she answers with a dexterity, grace, and polish that few authors could replicate.

Many would ask why she would spend 34 years researching such an ambiguous individual and novelizing his life. But her reasons are quite simple: “My intent is not to write a definitive biography, but to rouse public interest in a man whose life truly changed the world — who has affected all of our lives up to the present, and well into the future as long as governments seek their authenticity through people’s elected representatives.”

Taken from an article written by Scott Higginbotham

The comments, advice and opinions expressed here are those of authors whose books have been honored with a B.R.A.G. Medallion. They do not necessarily reflect the views of the owners, management, or employees of indieBRAG, LLC.
Authors' Chat, award winning books, From Fact to Fiction!, indieBRAG, The B.R.A.G.Medallion, The Self-publishing World, Writers, Readers & Self Publishing Historical fiction, Katherine Ashe, Montfort, research, Scott Higginbotham