Drift away to Montreal in the 1950’s and enjoy a French delight! 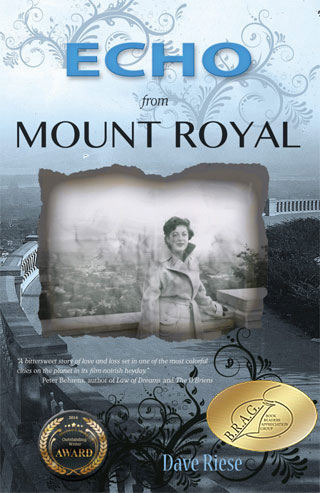 Author David Riese was having coffee one morning in his usual café when Riva Weiss, an older woman author Dave Riese had spoken to from time to time came over, sharing a story about a passionate love she had when just 18. Building on what Riva had told him, Dave expanded the bones of her story to a novel of a wonderfully poignant romance. Being built on a true story adds to the depth and interest of this work. To this day, Dave is still in touch with Riva, who turned 88 this year.

In 1951, the fictional Rebecca Wiseman meets and falls in love with Sol Gottesman at a YMHA dance. Despite coming from different social classes and families, the two are passionate in this first love. Based on a true-life romance, Dave writes a very romantic novel with a clear understanding of how both young men and women react to a first love. Sol woos Rebecca with beautiful flowers, fancy restaurants and whispered phone calls. Rebecca dreams of Sol, calls him frequently, quite forward for a young woman of that time, and even is the aggressive one romantically. Dave said that his ideas about romance did not come from Riva. “The incidents in the book primarily came from my imagination or from stories I remember hearing from girls in school.”

While Rebecca’s parents approve of Sol and his wealthy family, the Gottesmans feel that Sol is stepping down to date Rebecca and do all they can to drive the two apart. Despite Rebecca being younger than Sol, in many ways she is the tougher one. David told me, “I wanted the heroine to be strong and resourceful which is partly a result of her family being poor. She knew she was missing out on the privileges of the upper class and she was determined to experience some of these for herself.”  Her loving family gives her strength while the painful secrets in Sol’s youth have never been resolved. The sexual abuse in Sol’s childhood simmered beneath the surface of his growing years and re-emergences in adulthood and relationships with women Sexual abuse in Sol’s childhood has simmered beneath the surface of his growing years, emergence into adulthood and relationship with women. Sol is shamed and manipulated into silence by the family member who was the abuser and by the general silence maintained then and although less so, still to this day.

His marriage proposal and lack of a ring shows his ambivalence for marriage. Dave told me that the proposal came from real life. “[Riva] told me about his so-so proposal and the fact he didn’t have a ring which made the whole experience seem to her to be a half-hearted decision. The absence of a ring brought the scene to life for me. The incident with the kids helped to show how Sol was really a child unable to plan an important moment in their lives.”

While Dave is not from Montreal nor is he Jewish, meticulous research and the amazing memory of Riva Weiss, helped him reconstruct Montreal and its Jewish community, which is woven into the fabric of the novel. For many Jews in North America, assimilation was a goal. Rebecca feels Jewish but isn’t very knowledgeable about observances.

Despite her lack of observance and her Christian father, she faces antisemitism. We see this when Rebecca applies to McGill. “The woman in Admissions explained the quota for Jewish students had been reached for that year. She suggested I try the following year.” Rebecca swallows it quietly and leaves with no protest—what else could she do as the laws did not protect her rights. She applies and is accepted to a local, less prestigious college.

The Gottesmans, on the other hand, are openly pro-Israel, have business dealings there and Sol even goes to live in Tel Aviv for a time. Like many minorities at the time, the Gottesmans remain within their own community and their rejection of Rebecca is partially for this reason. Rebecca straddles two communities, with a Jewish mother and Catholic father who are both immigrants, they found suspicion from many quarters. Socio-economic class, religion, family differences and secrets from the past create an upheaval this first love between Rebecca and Sol.

Reading Echo from Mount Royal reminds all of us of our ardent first loves. We remember the highs and the heartbreaks, those who encouraged us and those who tried to end the relationship. For Sol and Rebecca, secrets that bubble to the surface changing their lives.

Dave brings to life Montreal in the 1950’s with his vibrant characters and poignant love story.

A traditional French and Montreal dessert is Crêpes au Sarrasin or Buckwheat Pancakes with a sweet filling folded into it. Bon Appetit!

Très français! Use all buckwheat flour.

Light as a feather: Use 1 ½ cups all purpose flour and no buckwheat flour

Sugar free: Use Stevia in place of sugar. For filling, use sugar free jam. Use Stevia to sweeten whipped cream.

Dairy free: Use seed or nut milk such as almond milk. Use non-dairy margarine in place of butter.

Savory crêpes: Omit sugar and vanilla. Fill with steamed or sautéed vegetables, such as creamed spinach. mushrooms with sautéed onions and cheese, scrambled eggs and cheese or roasted tomatoes, eggplant and a drizzle of tomato sauce.

The comments, advice and opinions expressed here are those of authors whose books have been honored with a B.R.A.G. Medallion. They do not necessarily reflect the views of the owners, management, or employees of indieBRAG, LLC.
Authors' Chat, award winning books, Bloggers, Book Spotlight, Food for Thought, Foodie Lit, indieBRAG, The B.R.A.G.Medallion, The Self-publishing World #indieBRAG #Foodie Lit #self-publishin