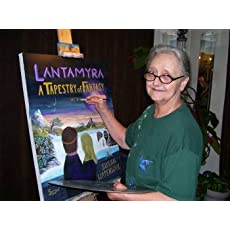 Becoming an author began with a dream I had of a lengthy conversation with a dragon; the dream ended with the image of a grandmother and adult granddaughter being carried by the dragon through a doorway in the sky to a magical world.

A few days after the dream, my daughters and granddaughters came to spend Mother’s Day with me. After dinner, I shared the story of the dream and told them that it would be fun to write a fantasy and create a world that people could escape to when life on Earth became too overwhelming. Everyone agreed. Later that night, the first pages were written.

I have been an avid reader of classic novels, as well as contemporary, and I enjoy reading fantasy and good sci-fi (by good, I mean where the author has researched the science to support the scientific concepts).

Since this would be my first serious attempt at writing, I wanted a light-hearted novel. If I was going to devote a lot of time inside the storyworld, I wanted to enjoy it. The women would be strong and intelligent, the men handsome and well-mannered (it’s a fantasy, remember) and the dragons would be intelligent and cultured. I also wanted a story that would appeal to sci-fi fans with scientific concepts that would intrigue. For the next seven years, I spent the majority of my time traveling between Earth and that magical world.

I felt that there was a magical symmetry in publishing the book in the Chinese Year of the Dragon, after all, some of my dragons were created in likeness and with respect to Chinese dragons.

For my book cover, I created a dreamscape of Lantamyra on canvas so that the reader could see some of the important elements of the story.

As a child (who never quite grew up) I spent a lot of time creating imaginary worlds in my mind, but never had the urge to write them down, until now, hence Lantamyra.

A Tale of Two Worlds