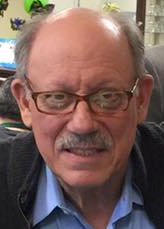 Like some of the characters in his first novel, Citizen Cárdenas, Steve Cole, has re-invented himself more than a few times. Now retired, he was a database developer and data architect in the health care industry for over twenty years. He’s been a factory worker, longshoreman and political activist. As a community advocate, from 1976-1986, Steve wrote articles for a community magazine, Keep Strong and a bi-weekly newspaper, All Chicago City News.

Steve grew up in Roselle, New Jersey in the 1950s and 60s, where he learned to appreciate different points of listening to the conversations of tennis players on the courts across the street from his family’s home. For the last 30 years, he has lived with his wife Pat, and son in their Chicago three-. The family has travelled to Greece numerous times to visit relatives there and has made learning Greek a family project. They are also active in their church’s Prison Ministry.