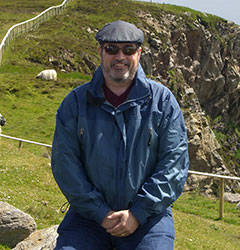 John L. Hickman has served in the field of law enforcement for over twenty-eight years. He began in Washington County, Maryland, and spent most of his career with the Loudoun County Sheriff’s Office in Virginia.

During his career, he served in many positions, including ten years on the sheriffs senior staff. He was one of the first forty-two jail managers nationally certified by the American Jail Association. He authored many articles for American Jails magazine and for the National Sheriff Magazine, as well as training keys used in some National Institute of Corrections classes.

John has spent most of his summers “upta camp” on a lake in Downeast Maine where he has enjoyed boating, swimming, fishing, and relaxing by the lakeside. He lives in Virginia with his wife, Jennifer, and enjoys watching his son’s bands play at local venues.

A Cold Snow In Castaway County