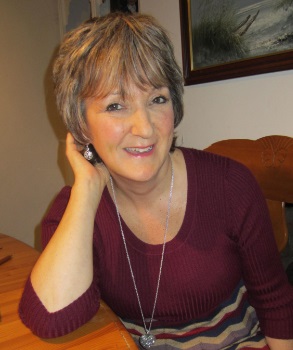 Even as a child Deborah Martin always read avidly, working her way along the shelves in the local library until she’d run out of books. That love of literature continued into adult life, with a degree in English Literature and Fine Art. Now, with a miscellany of careers from finance to teaching, nursery management to event management, behind her, she still reads enthusiastically but also now writes with equal passion.
Born in leafy Surrey in 1959, she moved to the forests and shores of Dorset as a child and then via Hampshire onto the dreaming spires of Oxford and its rolling countryside in 2013. Deborah is widowed with two daughters and a mud-loving dog – all helpful in keeping her feet on the ground even when her head is in a book.
Deborah is a B.R.A.G. Medallion honoree (http://www.bragmedallion.com/award-winning-books/thriller/patchwork-man/) for Patchwork Man, the first in her Patchwork People trilogy thriller series, self-published in 2014/15. She has self-published four additional fiction titles since, making seven books in total, plus a non-fiction book on writing. As well as writing full time, she now teaches workshops on creative writing, and in 2014 was the Chair of the Wantage (not just Betjeman) Literary Festival.
She is a self-acknowledge people watcher, explaining,
“Whatever I’m doing and whoever I’m with, a little part of me is watching and secretly wondering – what did that mean? Why did they do that? What might happen next? It was inevitable I would eventually put all those observations together into stories; but what happened next, and why, is never quite what you expect – as in real life, of course.”