Learning From Our Mistakes . . . Or Not 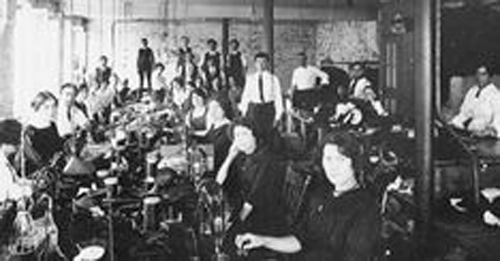 http://www.ilr.cornell.edu/trianglefire/ (Notice how the picture of the Triangle fire looks incredibly similar to those in the Times articles of the more recent fires: http://www.nytimes.com/2012/12/08/world/asia/pakistan-factory-fire-shows-flaws-in-monitoring.html?pagewanted=all)

History Times Three
For those of you following the New York Times stories of the fires at garment factories, first in Bangladesh, India, then in Karachi, Pakistan, you’ll notice the lamentable similarities to the Triangle Shirtwaist Factory fire in this country in 1911.
When I wrote The Triangle Murders, I researched the details of that fire and blogged about it in past posts. I fictionalized a murder set against the backdrop of the actual fire and detailed the forensic analysis of the fire after the fact. I also blogged about heroines like Clara Lemlich and Frances Perkins who helped raise awareness of the deplorable situation the garment workers found themselves in every day, as well as the changes Clara and Frances helped institute to prevent this kind of tragedy from happening again.
Reading the stories about these recent fires in other parts of the world simply blew my mind.
But first, back up to Saturday, March 25, 1911, and a few grim facts: The Triangle Shirtwaist Factory occupied the top three floors of the 10-story Asch Building on the northwest corner of Washington Place and Greene Street in Greenwich Village. On the eighth floor, fire broke out in a scrap bin. Perhaps someone tossed a match or cigarette butt into the bin. Soon flames leaped out and caught other fabrics. About 180 people worked on this floor. They rushed for the exit doors and fire escape. Many were trapped.
For various reasons, the workers on the ninth floor of the Asch building could not be contacted. It was estimated that 250 workers were on the floor that day. For an exquisitely poignant description of the events, you must read ‘Triangle – The Fire That Changed America” by David Von Drehle.
Suffice it to say here, that many of the workers were women and young girls, trapped by locked exit doors and only one poorly designed fire escape. Fire hoses reached only to the sixth floor, safety nets were unable to break the falls. To avoid suffocating or burning to death, the girls jumped nine stories to the pavement and their death. 146 of them.
“My building is fireproof,” Joseph J. Asch insisted. You might recall that the White Star Line directors made similar proclamations about the Titanic.
Fast forward to today. On September 11, 2012 in Karachi, Pakistan, close to 300 people, many of them women and children, died in a factory fire, trapped behind locked doors and barred windows. “There were no safety measures taken in the building design,” said a senior police official. “There was no emergency exit. These people were trapped.”
Just last month another tragedy occurred. Over 112 people, possibly seventy percent women, died in a fire at a garment factory outside Dhaka, Bangladesh. Why? Bangladesh’s garment industry, second only to China, has a notoriously poor fire safety record. Most of the workers killed were on the first and second floors and died because there were not enough exits. One survivor on the fifth floor said he escaped by climbing out of a third floor window onto bamboo scaffolding used for construction workers.
Yikes. What am I missing here? With today’s lightning-fast communications, surely most industrial nations got the message about safety in the workplace. Right? Why must we wait for a disaster to occur before we decide to act? Why not employ preventive measures to avoid tragedy? Like preventive medicine to avoid illness.
There must be a more effectual way to learn from history, to take those lessons and apply them today. History is not just hard facts that inform us about our past. History is the measure of our past deeds, good and bad. If we don’t take those lessons seriously, as a human race, we’re doomed to repeat our mistakes.
We can do better. We must do better.

March 25, 1911
It was an ordinary Saturday, a workday at the Triangle Shirtwaist Factory in Greenwich Village, New York. No one could possibly know that it would be the day of the most catastrophic event before 9-11. By day’s end, 146 garment workers, mostly women, would be dead. The world would forever be changed.
Read a few sample chapters from my mystery: The Triangle Murders, set against the backdrop of this historic event.
https://lynnekennedymysteries.com/…/THE_TRIANGLE… From Fact to Fiction!