Handfasting- a commitment by joining hands 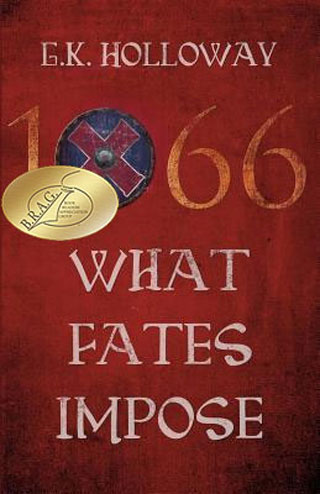 In the opening List of Main Characters in the book 1066: What Fates Impose, by G. K. Holloway, Edyth Swanneck is listed as “handfast wife of Harold,” the main character of the book. When I first read about Edyth and Harold in a novel long, long ago, I read that they were “handfasted” in marriage. When Harold took the throne of England (in the book I read) he needed a politically expedient wife and the Christian priests said that handfasting was no big deal and that Harold could just ignore it and get on with marrying his “real” wife in a Christian ceremony, which is what he did. At that time, I wasn’t too keen on “handfasting” nor Harold, for that matter! 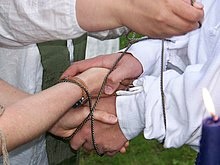 Since then, I’ve learned a lot more about the term and its origin. Apparently, the practice is over 7000 years old and was used in the English, Norse, Scottish and Celtic cultures. The word itself comes from Old Norse, “handfesta” which means to strike a bargain by joining hands. Hence, “May I have your hand in marriage?” “He asked her father for her hand in marriage.”

Actually, it started out as a commitment between a man and a woman to stay together for a year and a day and solemnized by tying a knot or knots in ribbon or rope/string around the couple’s joined hands. After a year and a day, they could renew it or make it permanent. When Christianity took over, the priests insisted on being the ones for formalize marriage and eventually marriage became a sacrament. Handfasting was vehemently discouraged because it could be done in secret, thus the Catholic reading of the banns announcing the intended marriage. Handfasting did not die out like the priests wished. It continued into the Tudor age and has enjoyed a surge today though performed by legal registrants. Some people use the ritual as an engagement ceremony. If you’d like to know more, visit:

If you’d like to know how handfasting is done today, visit: