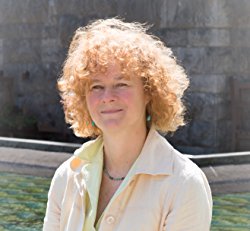 Kristin Gleeson
Originally from Philadelphia, Kristin Gleeson lives in Ireland, in the West Cork Gaeltacht, where she teaches art classes, plays harp, sings in an Irish choir and runs two book clubs for the village library. She holds a Masters in Library Science and a Ph.D. in history, and for a time was an administrator of a national denominational archives, library and museum in America.

Myths and other folk tales have always fascinated her and she combined her love of these tales with her harp playing and performed as a professional harper/storyteller at events in Britain, America and Ireland.

Moonyeen Blakey
Sadly, Moonyeen Blakey died in 2014, but she left some manuscripts behind that form the basis of The Imp of Eye.
Moon’s background in her own words:
I was born in Cleethorpes-a ‘seaside’ town in Lincolnshire, England-although it’s not strictly a sea which laps up our beach. The treacherous River Humber sweeps along this east coast and is known for trapping unwary ‘paddlers’ who brave its chilly waters.But the lure of golden sands, donkey rides and arcades draws visitors every year.
East-coasters have a reputation for being tough-probably because the winds here are cruel. But walk our beach in winter, preferably at dawn or dusk, to admire the windswept wonder of the scenery.
The Vikings settled on this coast. Grimsby, our sister town, and famous fishing port, was settled by one Grim, remembered in the famous “Lay of Havelock the Dane”.
My father was proud to be a Lincolnshire ‘Yellerbelly’ and brought me up to appreciate the treasures of the county King Henry VIII called “the most brute and beastly shire in England.”
Dismiss Lincolnshire as just a vast swathe of flat, agricultural land, and you’re making a mistake. Walk the Wolds and you’ll change your mind…Lincolnshire enjoys some secrets…
I began writing early–inspired by the visions I saw in my head, obsessed by historical events of the past, haunted by people who wanted their stories told…

The Imp of Eye